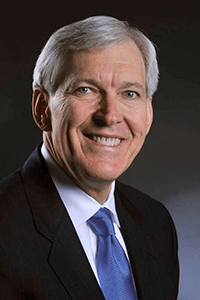 Tom Leppert is a member of the Pediatric Home Healthcare Advisory Board. Tom Leppert has a distinguished record of accomplishment that includes high profile, successful leadership positions in both the private and public sector. His professional experience spans developing major strategic initiatives for corporate clients as a Principal with McKinsey & Co., managing large international companies in the role of CEO in a range of industries, leading a major US city as the elected Mayor and serving as a White House Fellow.

From 2007-2011, he was the elected Mayor of Dallas, Texas. Mr. Leppert aggressively pursued policies that dramatically improved the quality of life in Dallas. In the areas of public safety, economic development, education and the environment, Dallas emerged as one of the focal points in the nation. In public safety, he directed a major expansion of the police force, which resulted in nearly a third reduction in both violent and total crime during tenure. During his tenure, he also guided major new investments in the areas of infrastructure, tourism and hospitality. He was actively involved in education, pioneering several innovative programs. He was widely recognized for instilling a professional, supportive and business-focused approach. Mr. Leppert also directed a major reform of ethics standards and practices and successfully led two major referendums. He served on the Executive Committee of the US Conference of Mayors.

Leppert has led major national and international corporations in the areas of construction, financial services and banking, homebuilding, real estate and education. He served as the Chairman/CEO of The Turner Corporation, the nation’s largest general building company, with over 7000 employees and 46 offices throughout the nation and international operations throughout Europe, Asia and the Middle East. During his tenure, revenues grew from $4 billion to over $9 billion. Total returns during his tenure surpassed the cumulative returns of the previous 97 years of the company. He led the entry into new markets and the implementation of a product focused organization to improve both marketing and product delivery. In addition, he guided the establishment of new enterprises in insurance/risk management, logistics and education/training among others. Most recently, he was the CEO of Kaplan, Inc., leading the global multi-billion dollar educational services company with over 22,000 employees.

Previously, Leppert was Vice Chairman of Pacific Century Financial Corporation and its major subsidiary, the Bank of Hawaii; President and CEO of Castle & Cooke Properties, Inc.; and a National Partner at Trammell Crow Company. He began his career at McKinsey & Co. where he was elected a Principal.

He currently is Chairman of two “Silicon Valley” based companies, serves on the Boards of large public and private companies in the United States and Europe, including Dallas based Austin Ind., and is involved with several other enterprises.

A lifelong community volunteer, he has served numerous community groups and charitable organizations on both the local and national levels. Leppert has chaired the West Dallas Community School, the Greater Dallas Regional Chamber, Hawaii Business Roundtable, the Bishop Museum, the leading natural history museum in the Pacific and the DCFR. He has also served on the boards of the US Chamber of Commerce, National Building Museum, Baylor Healthcare System, Dallas Zoological Society, Dallas Citizens Council, Claremont McKenna College and Harvard Business School Alumni. He was appointed by President George W. Bush to the White House Fellows Commission.

He is a noted speaker and has appeared regularly in the media, including FOX News, FOX Business, CNN, CNBC and others. He has been recognized nationally for his leadership, including “CEO of the Year” by D Magazine, the “Texas Businessman of the Year” by the Texas Association of Business, the “Torch of Conscience Award” from American Jewish Congress, the Russell H. Perry Free Enterprise Award from Dallas Baptist University, the George Benson Distinguished Alumni Award from Claremont McKenna College and “The Global Cross Millennium Award for Corporate Environmental Leadership” from Global Green. He has also been inducted into the “Energy Efficiency Hall of Fame” and the “Dallas Business Hall of Fame”.

He and his wife Laura live in Dallas. They have three children and are members of First Baptist Church Dallas, where he serves as a Deacon and on the finance committee and Pastor’s Leadership Council.
Back to Leadership